Whether you’re a new gun owner or an experienced shooter, there are several firearms training tips you can practice in the comfort of your own home to develop your skills and remain sharp.

After buying a gun, safe gun handling is one of the first things a new shooter must learn. Failure to observe gun safety rules can have tragic and fatal consequences. Col. Jeff Cooper popularized the four basic rules of gun safety, incorporating them into his Modern Technique.

All guns are always loaded. Even if they are not, treat them as if they are.

You should never assume that a firearm is unloaded or trust someone else’s word. Whenever you examine a firearm, check its loaded status. In semi-automatic pistols and rifles, you do this by removing the magazine and then retracting the slide or charging handle to inspect the firing chamber through the ejection port.

As an added safety measure, you should also insert your little finger into the chamber for tactile confirmation. Once you’ve confirmed that the firearm is unloaded and it’s still in your hand, you can safely press the trigger to release the hammer or striker.

If you check a firearm and leave it unattended, you should check it again on returning. As a matter of habit, any time you lay a weapon down and pick it up again, check the chamber.

Never let the muzzle cover anything you are not prepared to destroy.

Practicing muzzle awareness is essential to the safe handling of firearms. When you’re not shooting at a target, the muzzle of your firearm should be pointed in a safe direction so that if the weapon were to fire, it would not cause personal injury or property damage.

Even if you’ve verified the weapon is unloaded and it remains under your immediate control, pointing a firearm at another person unless that person is a threat violates this rule.

Keep your finger off the trigger until your sights are on the target.

When your sights are not aligned on a target, your finger should be off the trigger, outside the trigger guard, and straight alongside the frame or receiver.

If you lower your weapon, your finger should be off the trigger, returning as you raise your sights to eye level. In the context of concealed carry, a safe holster should have a fully covered trigger guard to ensure consistent observation of this rule.

Be sure of your target and what is behind it.

You should only shoot at a target that you have positively identified. Never shoot at a sound, shadow, or silhouette.

Whether in a self-defense shooting or on a firing range, always be sure of your intended target and what, if anything, is behind it.

Always ask yourself, if your bullet passes through the target, will it be reliably and safely stopped? 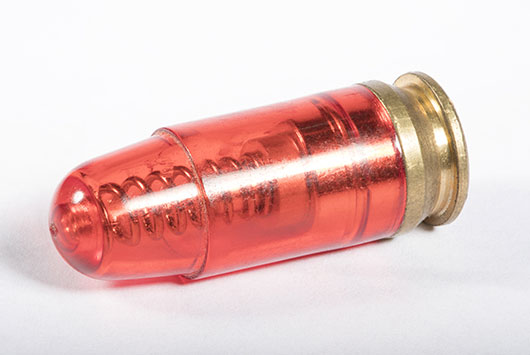 Ammunition and range fees can be expensive, especially during shortages. However, you don’t need to fire live cartridges to keep your skills sharp. Releasing the hammer on an empty chamber is called dry firing.

Dry fire practice allows you to practice the fundamentals of grip, stance, and trigger control in the safety of your own home without expending ammunition on a shooting range.

Some firearms can be damaged by dry firing. Guns that use rim-fired ammunition are subject to firing pin or barrel face damage when dry firing. Consult the owner’s manual or manufacturer’s website to see whether the company recommends dry firing.

One way to minimize the risk of damage is to invest in snap caps. A snap cap is a device resembling a cartridge designed to absorb the impact from the firing pin.

Don’t neglect live-fire range practice, however. While you don’t need to shoot a gun to practice the fundamentals, dry firing is not a substitute for target practice. You need to learn how to control the recoil of your weapon, especially when moving and switching between targets. Live-fire practice is also critical for determining the reliability of your firearm with different types of defensive ammunition.

Dry firing can help you maintain muscle memory when you don’t have access to a firing range. The principles remain the same regardless of whether you’re firing live ammunition.

To acquire a sight picture, you need to align the front and rear sights. You do this by placing the front sight in the center of the rear sight and ensuring the tips of both sights are level. Then align the sights with the bullseye or target. For practical purposes, fixed three-dot or tritium combat sights are adequate.

Acquire a full firing grip on the weapon. The action you perform with your hand and the part of the frame or stock you hold are both called “the grip.”

A full firing grip refers to what you do with your hand. The webbing between the thumb and index finger of your dominant or strong hand should be flush with the beavertail or recoil shoulder of the pistol or revolver frame. The barrel should be aligned with the bones of your forearm.

Your hand should be seated as high on the grip as you find comfortable. When you fire the weapon, the higher your firing hand is in relation to the axis of the bore, the less leverage there will be during recoil. This corresponds to less muzzle rise. The top of your dominant middle finger should press against the underside of the trigger guard or frame undercut.

If you prefer to use the Weaver stance, your non-dominant wrist will have less of a forward cant, and you’ll apply isometric tension to stabilize the handgun.

Your non-dominant thumb should not cross the webbing of your strong hand because this can place the first joint of your thumb in the path of the reciprocating slide. The object is to hold the weapon tightly, preventing lateral movement and reducing sight recovery time between shots. This requires increasing the contact area between your hands and the gun. 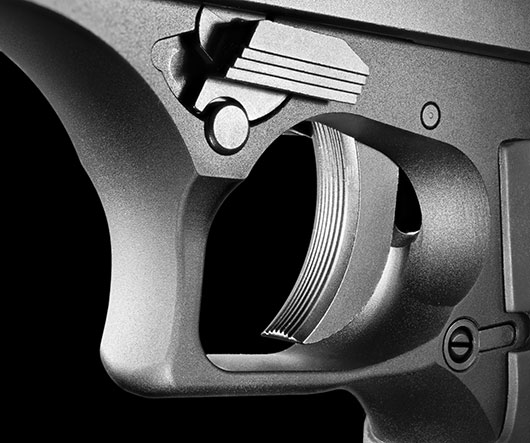 Trigger control is the act of pressing the trigger so as not to disturb your sight picture or the position of the muzzle relative to the target. While it’s customary to say, “Pulling the trigger,” this implies an abrupt jerking action rather than a gradual, smooth squeeze.

Typically, you’ll place the pad of your index finger, between the tip and the first joint, on the face of the trigger. If you need additional leverage, such as when firing a double-action revolver, it’s acceptable to use the first joint.

Once you reach the end of the slack phase, you’ll hit the phase called “the wall,” which is resistance from the mainspring.

Apply continuous rearward pressure through the wall and any creep you encounter until the shot breaks. If you lose your sight picture at any time during this process, you can interrupt your trigger press and resume at a later time.

If you find that holding the gun outward causes undue muscle strain, you may need physical conditioning. Fortunately, the muscles in your arms that allow you to raise a handgun or rifle to eye level respond quickly to some simple exercises. Strength training with a pair of dumbbells works, but holding a heavy handgun or rifle for an extended period can accomplish the desired effect.

You can also suspend a binoculars bag or backpack loaded with ammunition from your forearms or the barrel to increase the tension on your arms. Keep this up for a few minutes, gradually extending the time.

While you can practice the fundamentals of pistol marksmanship at home, enrolling in a gun-safety or CPL (concealed pistol license) class lays a solid foundation on which to build valuable skills. A qualified instructor will teach you everything you need to know to safely and effectively handle a firearm. In addition, a firearms instructor should teach you about the legal requirements for concealed carry and when you are entitled to use deadly force to defend yourself, your family, or your property against criminal aggression.

A firearms safe is generally useful for storing non-essential firearms and complying with safe-storage requirements. However, a traditional gun safe can impede access to firearms for self-defense. Gun safes that allow for rapid access, using RFID bracelets or four-digit keypads.

At IFA Tactical Training, we take firearms training seriously, whether you’re an experienced gun owner or have never held a firearm before. If you’re interested in enrolling in one of our CPL classes, give us a call at (586) 275-2176. We’ll teach you everything you need to know to safely handle, store, and carry firearms.